Home Page | About the Netherlands

The Country and its People
The Dutch are a surprising people. They live - all 16 million of them - on 41,528 square kilometres, little more than half the size of Scotland. The Netherlands is thus one of the world's most densely populated countries. But the Dutch have turned their crowded country into such a success that the world's planners and architects flock here to find out how.

The Netherlands is best known for its tulips, windmills and clogs. And for its low altitude and vulnerability to flooding. Less well known is that it is the world's eighth largest exporter of goods and capital and the world's third largest exporter of food. Equally little known is that Dutch people have won 15 Nobel prizes: for chemistry, physics, medicine, economics and peace.

The Dutch are major players in fields like science, the economy, the arts and sports - and their country is a beacon of forward-thinking social and cultural policy.

Bridge builders
The Netherlands lies on the delta of three major rivers: the Rhine, Maas and Scheldt. It owes its existence to feats of hydraulic engineering. 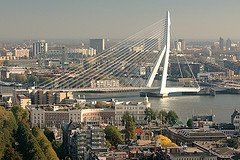 The Dutch are proud of their conquest of water. Their struggle to keep dry has helped them develop a can-do attitude. And since controlling water requires many parties to meet and plan together, it has forced them to learn how to work as a team. That is why their European partners and the broader international community regard the Dutch as bridge builders and often ask them to serve as such.

With Rotterdam the biggest port in the world, the Netherlands is an important gateway to Europe. And not only by water: Amsterdam Schiphol is one of Europe's biggest airports.

Each of the Netherlands' major cities has a distinctive character, even though they are all so close. Amsterdam, The Hague, Rotterdam and Utrecht all belong to the Randstad conurbation, with a population of ten million. Amsterdam attracts many tourists, with its historic centre, majestic buildings, museums and unique ring of canals.

But The Hague, Delft, Haarlem, Utrecht, Groningen and Maastricht also have their share of historic buildings, museums, traditions and attractions. Rotterdam is renowned for its strikingly modern architecture, as exemplified by the Erasmus Bridge, known locally as the "Swan".

Floods
The Netherlands' many bridges, dykes, windmills and pumping stations give it a unique appearance and illustrate its long struggle against the sea. The crowning achievement was the Delta Project, a chain of dams protecting Zeeland and South Holland from the North Sea.

Work on the Delta Project began after the 1953 floods, and it ended in 1997 with the completion of a storm surge barrier in the Nieuwe Waterweg. The barrier has two enormous hinged gates that can be lowered in severe weather to close off the 360-metre-wide waterway. It protects greater Rotterdam's one million inhabitants from flooding without harming the environment.
A quarter of the Netherlands' land area lies below sea level.

The low-lying areas consist mainly of "polders", flat stretches of land, surrounded by dikes, where the water table is controlled artificially. From the 16th century, windmills were used not just to keep the land dry, but even to drain entire inland lakes.

Religion
The 16th century Reformation split the Netherlands into Catholic and Protestant parts. The border between them runs roughly diagonally across the country from the southwest to the northeast. The part to the north was mainly Protestant, and the part to the south mainly Catholic. The Protestant community divided further into the Reformed Church and many other denominations ranging from orthodox to liberal. 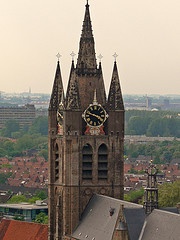 Since the 17th century, the Netherlands has been a home to Jews, mainly descendants of refugees from Spain and Portugal. And it was in the 17th century that the country received many Huguenot refugees from France. In the 20th century, Hindus and Muslims arrived from the former Dutch colonies of Indonesia and Suriname. And since the 1960s, they have been joined by more Muslims from Morocco and Turkey. The Netherlands is now home to almost one million Muslims.
In the second half of the 20th century, the Dutch churches lost much of their influence.

The tradition of adopting your parents' religion disappeared. First many Protestants, then many Catholics, abandoned formal religion. Less than half the Dutch population now belong to a church, but religious organisations still have a strong social influence. Freedom of religion was laid down in the 1848 Constitution, which separated church and state. This means that the government keeps out of the internal affairs of religious and other belief-based organisations.

And these organisations keep out of matters of state. But the government can help people practise their religion. The Care Institutions (Quality) Act, for instance, stipulates that care institutions must provide for the spiritual needs of patients in ways compatible with their religion or belief.

Multiculturalism
Dutch society used to be strictly organised along religious or ideological lines with every grouping having its own schools, newspapers, trade unions, clubs and so on. The traces can still be seen today in the media, interest groups and the education system. One of the benefits was that it helped prevent friction among religious and ideological groups, since they lived more or less independently alongside each other.

Article 1 of the Dutch Constitution says: "All persons in the Netherlands shall be treated equally in equal circumstances. Discrimination on the grounds of religion, belief, political opinion, race or sex or on any other grounds whatsoever shall not be permitted."

People have been migrating to the Netherlands for centuries. Of the current population, 18% are of recent foreign descent. The current immigration policy is restrictive because the Netherlands is so densely populated. In the 1950s, high population density led the government to encourage emigration. But in the 1960s and 1970s, a labour shortage attracted many migrants.

In recent years, the Netherlands has admitted immigrants on only three grounds: if their presence serves an essential Dutch interest, if they are entitled to live here under an international agreement, or if there are compelling humanitarian reasons for admitting them. The Government actively pursues policies to help immigrants integrate.

The Dutch language
Dutch is the mother tongue of more than 22 million people in the Netherlands and Belgium. In northwestern France, around 60,000 people speak a Dutch dialect.
Dutch is used widely in government and education in the former colony of Suriname and in Aruba and the Netherlands Antilles, which are part of the Kingdom of the Netherlands. In Indonesia, many lawyers and historians speak Dutch owing to historical ties. Afrikaans, which is spoken in South Africa, is an offshoot of Dutch. Dutch has also influenced other languages, especially in shipping, waterworks and agriculture.

Dutch is taught at around 250 universities around the world. In French-speaking Belgium, northern France and Germany, many pupils choose Dutch as their second language. In 1980, the Netherlands and Flanders founded the Nederlandse Taalunie (Dutch Language Union), which promotes Dutch worldwide and draws up rules for spelling and grammar.

In the province of Friesland, they speak a separate language: Frisian. This officially recognised language is the mother tongue of around 400,000 people. It is similar in some ways to English and the Scandinavian languages. Dutch is used in schools throughout the country, including Friesland.

Comments on this article